At WSJ on the Eivind Opsvik disc 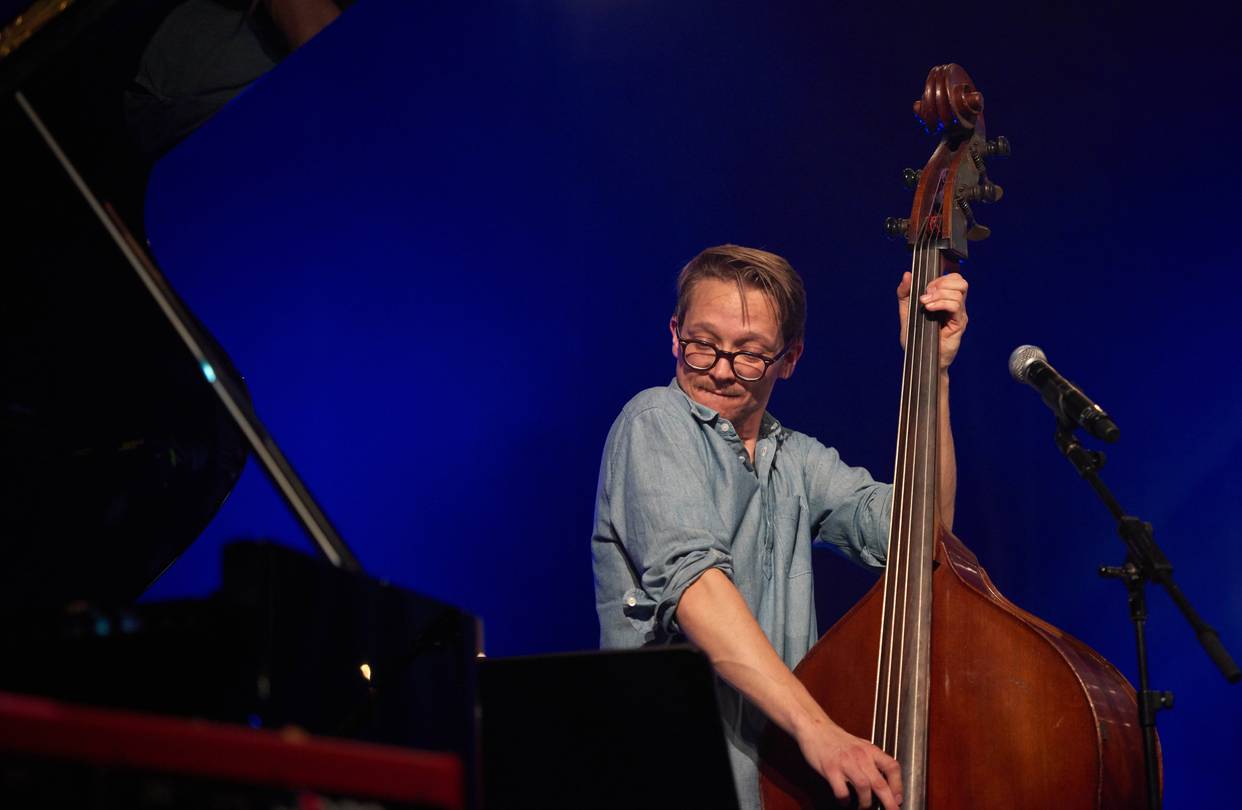 In 1998, the bassist and composer Eivind Opsvik emigrated from his native Oslo to New York and immediately immersed himself in its jazz scene, working with many top artists as a sideman and as a leader on several well-received recordings. In much of his work, he seemed to be at the center of postmillennial jazz. On his latest release “Overseas V” (Loyal, March 17 release), he dotes on a vintage phase of New York music, the late ’70s and early ’80s.

The boisterous yet concise music on Mr. Opsvik’s latest recording takes its cues from the punk funk era, when the daring virtuosity of the music heard in jazz lofts both in SoHo and at the Tin Palace, a club on the Bowery just a few doors north of CBGB, combined with the frenetic energy of the punk rock and local funk scenes that were headquartered at nearby venues. It was a short lived scene that gave rise to groups like James Blood Ulmer’s Music Revelation Ensemble, Ronald Shannon Jackson and the Decoding Society, Material and several solo projects by Bill Laswell.

“Overseas V” offers much more than a revival of an obscure, eclectic phase of Gotham’s musical history. The richly textured, intricately woven music features a quintet with Mr. Opsvik, saxophonist Tony Malaby, pianist Jacob Sacks, guitarist Brandon Seabrook and drummer Kenny Wollesen, and it displays many contemporary traits. For instance, Mr. Malaby often plays short staccato riffs in tandem with Mr. Seabrook’s scratchy guitar licks and Mr. Wollesen’s punchy rhythms. Rather than position the saxophone in the usual role as the lead voice within the group, Mr. Malaby is often a component of the rhythms. The music feels almost like pop songs; none of the recording’s nine tracks is more than six minutes and only three are more than five. There is a vibrant, intense rhythmic edge to this music that gives it urgency. It doesn’t draw you to it; instead, it rushes out of the speakers.

The contrast between the current recording and his 2012 release with this group, “Overseas IV” (Loyal), provides an excellent measure of Mr. Opsvik’s range. “IV” featured the same personnel and offered more serene and introspective music. That recording was inspired by the Sofia Coppola movie “Marie Antoinette.” Mr Opsvik, who is 43, said the inspiration for the new recording came in part from the shorter periods of attention that result from fatherhood and one track even resulted from jamming on a toy piano while Iris, his toddler daughter, played shaker. Mr.Seabrook’s wife, Anais Blondet, created a video for one of the best tunes on the recording, “Brraps!,” with the bassist playing a disheveled mad professor. In the press release for the recording, he says, “I think modern jazz can get a bit too serious and intellectual at times—so whether it’s catchy tunes or a music video, I think it can lighten up.”

I've worked in and around the world of high end cheese for 27 years. I've been everything from a department manager who hired and fired and trained staffs to a weekend warrior who shows up ties on an apron the middle of a rush and talks to customers and cleans up the place. I enjoy it all, and I especially like my current situation conducting informal seminars about cheese at area bars and in class at the 92nd St. Y. The current schedule is always up at thejoyofcheese.blogspot.com. In addition I conduct private events that are perfect to lead off birthday parties for foodies and sommeliers and also they make great entertainment for corporate team building events and associates meetings at law firms. In addition, I've been a freelance journalist for 27 years. Currently my profiles of leading musicians and filmmakers appear in the Wall Street Journal and www.theroot.com. I also wrote about sports for the Root, and for five loooong years, which included the entirety of the Isiah Thomas Knicks era, I wrote about the NBA for the New York Sun. I enjoyed writing about basketball so much that I now do it here at rotations for free.
View all posts by jmartin437 →
This entry was posted in Archives, Arts, Jazz, Music, Uncategorized and tagged Albums, Bass, Funk, jazz, Music, New York City, NYC, Opsvik, Punk, WSJ. Bookmark the permalink.