From the Archives, at WSJ on Bill Frisell

Bill Frisell is the most innovative and influential jazz guitarist of the past 25 years. He has brought a country twang into the jazz vocabulary, first by creating music that had a distinctly rural, open-field sound, then in recent years by creating a variety of chamber groups—often drummerless ensembles highlighted by violins and cello—to expand this unique approach in a variety of ways. He has devoted an album to music that evokes the work and spirit of the Depression-era portrait photographer Mike Disfarmer, and his 858 Ensemble put sound to a series of paintings by the contemporary German artist Gerhard Richter. With more than 35 recordings released, he is one of the most emulated musicians in jazz. 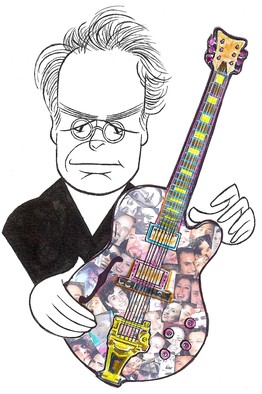 The guitarist, who is 59, acknowledges his music’s association with rural life but has another explanation for the sound: “I talk slow,” he said by phone last month from San Francisco, where he was setting up to record a new disc with his 858 Ensemble. “I move slowly too; I’m just a deliberate person.” He said that pace is reflected in his groups and their instrumentation.

Earlier this year, the guitarist released “Beautiful Dreamers” (Savoy), a disc featuring a new trio with violinist Eyvind Kang and drummer Rudy Royston, which enables him to bridge the gap between his more straightforward jazz side (he has recorded trio sessions with bassists Dave Holland and Ron Carter and drummers Elvin Jones and Roy Haynes) and his chamber ensembles. From Nov. 3 to 8, the trio will play one-night stands in Seattle; McPherson, Kan.; Birmingham, Ala.; Denton and Austin, Texas; and finishing in Los Angeles. And from Nov. 18 to 20 he will play new work with his Disfarmer ensemble in West Lafayette, Ind., Chicago, and New York.

Mr. Frisell resists easy categorization. His career first took flight in the late 1970s, when he appeared on several records on the renowned German jazz label ECM. It picked up speed as he became a fixture in New York’s avant-garde improvised music scene of the ’80s. “First I was a European-style player, then I was a downtown ‘noise guy,’ and now some people call me an Americana guy,” he said and paused. “I hate labels; the problem is that if you say you’re one thing, it’s hard for people to imagine you as something else. Music is way more complicated than that.”

Mr. Frisell was born in Baltimore and grew up in Denver. He was always drawn to music and especially his instrument. Inspired by Jimmie Dodd of “The Mickey Mouse Club” TV series, he recalls having a cardboard cutout of a guitar that he drew the strings onto. Within weeks of getting his first real guitar at age 14, he was in a band. “I guess that’s how it all started, and it’s never really stopped,” he said with a chuckle.

His signature sound—pungent, almost mournfully low and reverberant—is one of the most readily identifiable in jazz today. It’s a broad sound that covers much of the sonic ground that a saxophone would in a small jazz combo. Thus it comes as little surprise that his groups are often made up of players like Mr. Kang, violinist Jenny Scheinman, trumpeter Ron Miles and cellist Hank Roberts. The strings often create a tense counterpoint to Mr. Frisell’s guitar, but the repertoire for his groups is unpredictable. In addition to his originals, his covers range from the Hank Williams classic “I Can’t Help It (If I’m Still in Love With You)” to the Teddy Randazzo/Bobby Weinstein pop evergreen “Goin’ Out of My Head.” Mr. Frisell says he chooses some tunes as part of an investigation of his past. “Everything new comes from something before it,” he said, citing various country and jazz influences on classic pop.

It was a similar level of inquiry that drove the Disfarmer project. Mr. Frisell said he was approached a few years ago by Chuck Helm of the Wexner Center for the Arts in Columbus, Ohio, about doing music pegged to the work of the portrait photographer. “I was fascinated by his work,” said Mr. Frisell, “but I didn’t want to write music based on just looking at a few photographs.” Instead he went to Heber Springs, Ark., the eccentric artist’s hometown, and was fortunate to interview one of Disfarmer’s subjects, a man who also buried the photographer. The music was recorded on Mr. Frisell’s 2009 release “Disfarmer” (Nonesuch), and it is austere yet elegant. He said his aim was to locate Disfarmer in the tradition of artists whose genius went unrecognized in his time.

The trio found on “Beautiful Dreamers” has a simpler back story. It reflects Mr. Frisell’s desire to work with Mr. Royston, a drummer he first heard on a visit to Denver in the ’90s. At the time, Mr. Royston was based there and not traveling much. But after Mr. Royston moved to the East Coast a few years ago, Mr. Frisell leaped at the opportunity to form a group with him and Mr. Kang. “We played about a dozen gigs, and it just felt like a good combination,” Mr. Frisell said. Their music is lithe and spry; at times it feels like a deliberately sunny follow up to the darker work found on “Disfarmer.”

Although both of his art- inspired projects were suggested to him by others—the Richter set was the idea of the writer David Breskin—Mr. Frisell is never far from paintings; his wife is the painter Carole d’Inverno. The couple recently spent a month among 60 artists in residence at the Vermont Studio Center. Mr. Frisell was the only musician in their midst, and he composed while there. During an open house, rather than just play the results of his efforts, Mr. Frisell hung all 50 pages of music he had worked on as if they were his paintings. “It was amazing,” he said. “By getting the music out of notebooks, I could really see the big-picture things I was working on.”

I've worked in and around the world of high end cheese for 27 years. I've been everything from a department manager who hired and fired and trained staffs to a weekend warrior who shows up ties on an apron the middle of a rush and talks to customers and cleans up the place. I enjoy it all, and I especially like my current situation conducting informal seminars about cheese at area bars and in class at the 92nd St. Y. The current schedule is always up at thejoyofcheese.blogspot.com. In addition I conduct private events that are perfect to lead off birthday parties for foodies and sommeliers and also they make great entertainment for corporate team building events and associates meetings at law firms. In addition, I've been a freelance journalist for 27 years. Currently my profiles of leading musicians and filmmakers appear in the Wall Street Journal and www.theroot.com. I also wrote about sports for the Root, and for five loooong years, which included the entirety of the Isiah Thomas Knicks era, I wrote about the NBA for the New York Sun. I enjoyed writing about basketball so much that I now do it here at rotations for free.
View all posts by jmartin437 →
This entry was posted in Archives, Arts, Film, Jazz, Media, Music, Uncategorized and tagged archives, Bill Frisell, Guitar, Music, WSJ. Bookmark the permalink.