From the Archives: At WSJ on Henry Threadgill

For a quarter century beginning in the mid-1970s, reedman and composer Henry Threadgill was a dominant force on the jazz and contemporary-classical music scenes. He led a variety of ensembles with increasingly idiosyncratic names like Air, the Henry Threadgill Sextett, the Very Very Circus, Make a Move and Zooid. These groups pushed the boundaries of both jazz and new music, yet they also trafficked in familiar elements like tangos, marches and fanfares. It was easy to become a Henry Threadgill fan without being a lover of jazz or new-music.

“What first struck me about Henry’s work is its lyricism,” said Butch Morris, a composer, cornetist and conductor who has followed Mr. Threadgill’s career since the ’70s. “He’s taken familiar forms and really advanced them.” 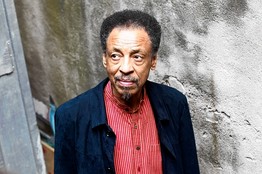 Saxophonist Henry Threadgill and his group Zooid will perform this week at Roulette in SoHo. AMY SUSSMAN FOR THE WALL STREET JOURNAL

Then about eight years ago, Mr. Threadgill faded to the margins. He released no widely distributed recordings, and was heard in concert only sporadically. He finally returned last autumn with his band, Zooid, on “This Brings Us To, Vol. I,” (Pi Recordings), which was widely hailed as one of the best jazz recordings of the year.

This season, Mr. Threadgill is much more prominent, with “This Brings Us To, Vol. II” (Pi) and Mosaic Records’s limited-edition eight-disc retrospective, “The Complete Novus & Columbia Recordings of Henry Threadgill & Air.” In addition, Zooid is to perform Mr. Threadgill’s newest works at Roulette in SoHo for three nights this week beginning Thursday.

Over drinks at an Italian café near his East Village home, Mr. Threadgill said the hiatus gave his band time to master his new style of composing music. “I have completely left the majorminor system in favor of a chromatic way,” he said.

Liberty Ellman, Zooid’s guitarist, added via email, “It’s a system for developing harmony and counterpoint from a set of intervals that originate in chord analysis.”

For Mr. Threadgill, one of the key goals of the new system was to facilitate collective improvisation along the lines of early jazz. Mr. Ellman said it was a challenge to learn the new system. “It’s difficult at first to put aside your pre-existing vocabulary while learning to play Henry’s music, but over time it becomes intuitive and it really opens your ears up to a larger musical universe.”

Mr. Threadgill, 66 years old, was born and raised in Chicago. He moved to New York in the mid ’70s and made his first mark with Air, a trio featuring bassist Fred Hopkins and drummer Steve McCall. Their 1979 recording, “Air Lore,” which is included in the Mosaic set, offered reinterpretations of the music of Scott Joplin and Jelly Roll Morton, and is acclaimed as one of the best jazz recordings of the late ’70s. “He’s one of the only musicians who has gone beyond the surface markers of Morton’s style,” said Anthony Coleman, a pianist and composer who recently also released a recording of Morton’s music. “It’s more than mere photo-realism.”

In the early ’80s, Mr. Threadgill presented his Sextett. He explained that the second ‘t’ in the group’s name highlighted the fact that their music was written for six instruments, though it was played by seven musicians (the drum part required two men). “You can have a quartet sung by 40 musicians, 10 singing each part,” he said. “I wanted my music to be viewed with the same respect.”

Make a Move blends electric guitar with accordion and harmonium. The unifying element is Mr. Threadgill’s horn: His alto saxophone has a gritty, emotional quality, often an urgent voice above a wealth of intriguing rhythms.

The Mosaic box also includes unreleased work from Mr. Threadgill’s rarely heard X-75 ensemble. Unfortunately, some of the composer’s most intriguing ensembles have gone unrecorded. For instance, a YouTube clip from a concert in Hamburg, Germany, in 1988 is one of the few public documentations of his 18-piece Society Situation Dance Band. Mr. Threadgill felt it should only be heard in concert.

Mr. Threadgill still lives in the same neighborhood he moved to in the mid ’70s, and has seen the East Village change enormously since then. Yet he continues to find great inspiration sitting in Tompkins Square Park. “You can still learn so much from watching and listening to what goes on there.”

I've worked in and around the world of high end cheese for 27 years. I've been everything from a department manager who hired and fired and trained staffs to a weekend warrior who shows up ties on an apron the middle of a rush and talks to customers and cleans up the place. I enjoy it all, and I especially like my current situation conducting informal seminars about cheese at area bars and in class at the 92nd St. Y. The current schedule is always up at thejoyofcheese.blogspot.com. In addition I conduct private events that are perfect to lead off birthday parties for foodies and sommeliers and also they make great entertainment for corporate team building events and associates meetings at law firms. In addition, I've been a freelance journalist for 27 years. Currently my profiles of leading musicians and filmmakers appear in the Wall Street Journal and www.theroot.com. I also wrote about sports for the Root, and for five loooong years, which included the entirety of the Isiah Thomas Knicks era, I wrote about the NBA for the New York Sun. I enjoyed writing about basketball so much that I now do it here at rotations for free.
View all posts by jmartin437 →
This entry was posted in Archives, Arts, Jazz, Music, Uncategorized and tagged AACM, Art, Life, Music, NYC, Work, WSJ. Bookmark the permalink.