From the Archives: At WSJ on Nelson George in 2011

“I call it black history with a smile,” said the author and filmmaker Nelson George recently over beverages at a muffin shop in Fort Greene. “Everyone who came here found their artistic voice and became a success.” 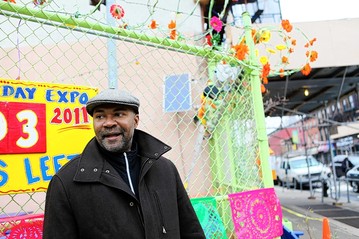 Nelson George in his home neighborhood of Fort Greene. He is at work on a new film called ‘Brooklyn Boheme.’DANIELLA ZALCMAN FOR THE WALL STREET JOURNAL

Mr. George means “here” literally. Fort Greene, the Brooklyn neighborhood he has called home for nearly 26 years, is the subject of his latest project, a two-hour documentary called “Brooklyn Boheme.” The film, which was co-directed by Diane Paragas and funded in part via donations through the entrepreneurial web site Kickstarter, is currently in the post-production phase. It explores a brief window in the neighborhood’s history, from the mid-1980s through recent years, during which time it hosted a remarkable assemblage of African-American and Hispanic actors, writers, filmmakers, poets and musicians as they transformed from aspiring artists into stars.

For Mr. George—who, if prompted, will rattle off the various addresses he’s lived in the neighborhood—the film represents a swan song of sorts. When he’s finished making “Brooklyn Boheme,” he will leave Fort Greene, which he says is no longer the neighborhood he came to love in the 1980s. “I think all of us benefited from our time in the community,” he said. “It was a place where ambitious young people found themselves and laughed a lot.”

Generally speaking, the 1980s and ’90s were a fertile period for African-American cultural development throughout the city, from the birth of hip-hop in the Bronx to the Young Lions jazz movement in Manhattan and the filmmaking of Spike Lee and Matty Rich in Brooklyn. But Fort Greene, said the writer and musician Greg Tate, stood apart for the remarkable number of African-American artists—such as Wesley Snipes, Branford Marsalis, Chris Rock, Erykah Badu, Mos Def and Common—who emerged as stars while living there during those two decades. “I don’t think so much fresh, energetic, innovative black American talent has been so concentrated in one part of the city since,” he said.

Mr. George, 53 years old, said his new film grew out of his 2009 memoir “City Kid: A Writer’s Memoir of Ghetto Life and Post-Soul Success” (Viking), which explored the connections between his childhood in Brownsville and East New York and his career as renowned author and filmmaker. “After writing the book, I felt I should document that era,” he said. “I didn’t want it to be scholarly, just people who lived here talking about it what it was like.”

Mr. George arrived in Fort Greene in 1985 as a young writer. “I just happened to move around the corner from Spike [Lee],” he said. “I went with him to Knicks games back when he had really bad tickets.” He helped the burgeoning director finance his first film, “She’s Gotta Have It.”

Within a few years, Mr. George found himself surrounded by cutting-edge African-American artists and performers. He soon became an editor at Billboard magazine and a columnist for the Village Voice. In the years since, he has published 15 books and a number of screenplays, and directed several films. He cited Fort Greene’s proximity to Manhattan as well as its superior architecture and, in the 1980s, affordable prices—the result of a once-affluent, culturally rich area having fallen on hard times in the 1970s—for the rapid evolution of the community. “[Author] Carl Hancock Rux moved into a duplex apartment for $350 and his landlord asked him if he could recommend the other vacant units to his friends,” Mr. George said. “You could buy a house for a hundred thousand.”

Roger Guenveur Smith, an actor and author who has appeared in several of Mr. Lee’s films, moved to the neighborhood in the 1990s from Los Angeles. “I reveled in Fort Greene’s histories and its possibilities,” he said. “My daughter was baptized there, on the corner of Lafayette and Vanderbilt.”

Mr. George cited his friendship and collaborations with Mr. Lee, who lived and worked in Fort Greene for more than two decades, for his own interest in filmmaking, but he also credited the bustling artistic activity in the neighborhood. “It kept you motivated,” he said. “Everyone was always busy with interesting projects.”

His own impending move is motivated primarily by the opening of the Barclay’s Center, which will house the soon-to-be Brooklyn Nets of the NBA. Citing the population density and traffic that it will bring, he said, “the DNA of the area will change profoundly; it will be the end of this era of the neighborhood.”

But, he added, “I won’t leave before I finish the movie; that would just be wrong.”

I've worked in and around the world of high end cheese for 27 years. I've been everything from a department manager who hired and fired and trained staffs to a weekend warrior who shows up ties on an apron the middle of a rush and talks to customers and cleans up the place. I enjoy it all, and I especially like my current situation conducting informal seminars about cheese at area bars and in class at the 92nd St. Y. The current schedule is always up at thejoyofcheese.blogspot.com. In addition I conduct private events that are perfect to lead off birthday parties for foodies and sommeliers and also they make great entertainment for corporate team building events and associates meetings at law firms. In addition, I've been a freelance journalist for 27 years. Currently my profiles of leading musicians and filmmakers appear in the Wall Street Journal and www.theroot.com. I also wrote about sports for the Root, and for five loooong years, which included the entirety of the Isiah Thomas Knicks era, I wrote about the NBA for the New York Sun. I enjoyed writing about basketball so much that I now do it here at rotations for free.
View all posts by jmartin437 →
This entry was posted in Arts, basketball, movies, Music, Politics, race, thoughts and musings, Uncategorized and tagged brooklyn, Chris Rock, Comedy, Fort Greene, Music, Nelson George, NYC, Spike Lee, The 80s, The 90s. Bookmark the permalink.