From the Archives: at WSJ on Ornette Coleman’s The Shape of Jazz To Come

I was delighted to write this and even better, it ran the weekend of my only trip to the Pop Conference.

As years go, 1959 was a landmark for jazz recordings. Miles Davis created his “Kind of Blue” and John Coltrane made his “Giant Steps.” But the most influential jazz album made in 1959 came from Ornette Coleman, then an outcast in that musical community. It was called “The Shape of Jazz to Come.”

The record lived up to its title. Mr. Coleman’s innovations are often called “free jazz,” but that’s an oversimplification. While he did loosen the existing rules in an attempt to bring harmony, melody and rhythm into a more equal relationship within the music, Mr. Coleman was no finger-wagging modernist. Nor did he advocate musical anarchy (though to some ears his music still sounds like noise). He wanted to give musicians the freedom to play in accordance with the emotion of the tune, rather than limiting them to the notes and sequences dictated by chord changes, the progression of notes that create the harmonic structure of a song. 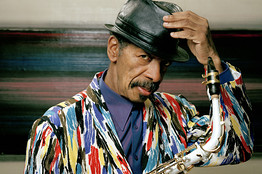 On “The Shape of Jazz to Come,” Mr. Coleman’s quartet made music that was bluesy and often achingly beautiful. His followers established an avant garde that has grown in the past half-century into one of the most consistently vital wings of jazz.

Back in 1959, Mr. Coleman seemed an unlikely source for one of the greatest jazz recordings of all time. He was playing sporadically in Los Angeles, where he moved from his native Fort Worth, Texas, earlier in the decade. Born in 1930, he had grown up with a group of likeminded innovators, such as the trumpeter Bobby Bradford and the clarinetist John Carter, who sought to open jazz’s harmonic structure to allow a deeper expression of the blues. These concepts met with an often hostile reception on the Texas jazz scene and within the L.A. mainstream.

Mr. Coleman was shunned at jam sessions in both places; one angry Texan broke his saxophone. Unable to make a living as a musician, Mr. Coleman took a variety of odd jobs, including elevator operator. But he found several allies in California. Trumpeter Don Cherry and bassist Charlie Haden met him and were excited by his innovations. Pianist John Lewis of the Modern Jazz Quartet heard one of Mr. Coleman’s performances and persuaded Nesuhi Ertegun of Atlantic Records to sign him to a deal. Mr. Lewis thought that Mr. Coleman’s music was the first significant step forward in jazz since the advent of bebop in the early 1940s.

Listen to clips from the influential 1959 album “The Shape of Jazz to Come” by Ornette Coleman:

Mr. Coleman is soft-spoken and rarely expresses rancor about his past. He recalled his West Coast stint during a telephone interview in December. “It was a very active jazz community,” he said. “There were a lot of good players in a variety of styles; it was very enjoyable to be a part of it.”

He had recorded twice in California, but both sessions compromised his ideas by matching him with conventional musicians. Atlantic Records gave him the chance to record with a trio of players who shared his convictions — Messrs. Haden and Cherry, as well as drummer Billy Higgins. The music they made still sounds astonishing and fresh today.

The recording opens with “Lonely Woman,” a ballad that has deservedly become a jazz standard. It doesn’t sound revolutionary, however. That comes on the next track, “Eventually,” an up-tempo number that features a soaring, jittery solo from Mr. Coleman that sounds exhilarating today but probably left many listeners bewildered 50 years ago. It’s followed by the sweet, reassuring “Peace,” another tune that has found its way into the repertoire of many jazz groups. The album’s remaining three tunes feature ensemble portions that are familiar and melodic yet highlighted by intoxicating solos that have little to do with the harmonic structure of the piece. Mr. Coleman’s quartet liberated jazz from some musical restraints, yet it made music that was urgent, compelling and accessible. 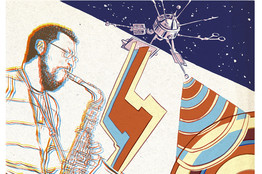 “The Shape of Jazz to Come” was released in October 1959 and immediately created a firestorm in the jazz community. Miles Davis told Joe Goldberg, in his 1983 book “Jazz Masters of the ’50s” (Da Capo), “Just listen to what he writes and how he plays. The man is all screwed up inside.” Bassist Charles Mingus told Downbeat in 1960: “It’s like organized disorganization or playing wrong right. It gets to you emotionally like a drummer.”

Mr. Coleman and his bandmates moved to New York, and in November 1959 they made their debut at the Five Spot, one of Gotham’s most renowned jazz clubs. The intensity of the response in the New York jazz world made the gig one of the most famous in jazz history.

Although the performances intensified the vitriol of some of Mr. Coleman’s detractors, he said he was pleasantly surprised by the positive reception. Compared to what he normally encountered in Texas and Los Angeles, the New York naysayers amounted to a minor nuisance.

Coltrane and Sonny Rollins came to several shows, and both went on to make recordings with Coleman sidemen. (Mr. Coleman said that Coltrane even visited his house to play.) Many younger musicians began to build on Mr. Coleman’s style, and by 1963 a full-fledged jazz avant garde had formed.

The Five Spot engagement was originally scheduled to last two weeks; it was extended for 2 months. “The Shape of Jazz to Come” sold extremely well, and a few months later Mr. Coleman released a disc whose title made it clear he was aware of his impact. The recording is called “Change of the Century.”

I've worked in and around the world of high end cheese for 27 years. I've been everything from a department manager who hired and fired and trained staffs to a weekend warrior who shows up ties on an apron the middle of a rush and talks to customers and cleans up the place. I enjoy it all, and I especially like my current situation conducting informal seminars about cheese at area bars and in class at the 92nd St. Y. The current schedule is always up at thejoyofcheese.blogspot.com. In addition I conduct private events that are perfect to lead off birthday parties for foodies and sommeliers and also they make great entertainment for corporate team building events and associates meetings at law firms. In addition, I've been a freelance journalist for 27 years. Currently my profiles of leading musicians and filmmakers appear in the Wall Street Journal and www.theroot.com. I also wrote about sports for the Root, and for five loooong years, which included the entirety of the Isiah Thomas Knicks era, I wrote about the NBA for the New York Sun. I enjoyed writing about basketball so much that I now do it here at rotations for free.
View all posts by jmartin437 →
This entry was posted in Archives, Arts, Jazz, Music, Uncategorized and tagged archives, Classics, Jazz, Music, Ornette, Work, WSJ. Bookmark the permalink.